Szeged and Subotica, two major cities of the Pannonian Plain, are 50 kilometers apart, halfway between Budapest and Belgrade. Both cities have a similar historical fate, both during the Turkish occupation and later in the Austro-Hungarian Monarchy. At the turn of the century, the uniquely ornate architectural style, the Art Nouveau,gained ground in Szeged, which was renovated after the great flood of 1879 and in Subotica, which saw a booming industry due to the construction of railways. It was then that both cities received their current metropolitan image, enriched with eclectic palaces and public buildings. Visitors of these cities, which are becoming more and more popular for tourism, are attracted by their built heritage. Besides, these cities show several similarities in some fields, like, for example, they offer a rich variety of gastronomic specialities, both areas are rich in natural waters, also, they invite visitors with a wide variety of events. However, what they really have in common and what makes them exceptional is their spectacular and impressive Art Nouveau architecture.

A new art that was, at the turning point between the nineteenth and the twentieth century, inspired by the tumult of industrialization, urbanization and the rapidly changing society, protesting against the strict canons of historicism and dominant styles. Therefore, Art Nouveau didn’t seek inspiration in previous epochs and art movements, but rather looked for ideas in nature, its forms and structure. Art Nouveau has left its mark on all forms of art and all areas of modern life. Art Nouveau is not just an art movement – it is a way of life.

Geometric and floral motifs as well as images of women – have become favorite design elements of architects throughout Europe.

Although international in its core, in different regions, amplified by national feelings, it manifested itself in different forms. In Austria it was known as the Vienna Secession, in Germany as Jugendstil, in France and Belgium as Art Nouveau, in England as Modern Style, in Italy as Liberty style and in the Austro – Hungarian Empire – Secession.

At the turn of the nineteenth and the twentieth century, the boiling events in Europe in the fields of art, science and life arrived via Budapest to Subotica as well – at that time, two cities within the same country. It was a period of peace and economic prosperity, when Subotica was at the peak of its architectural development. Changes that originated in Europe slowly found their way in Subotica’s architecture as well, but were further developed in two directions, in two distinct currents. While one current gravitated toward European cities such as Munich, Vienna, Paris and London, the other, more dominant one, turned to the national, Hungarian version of Art Nouveau- Secession. Although the European current was more abundant, the Hungarian version, with only few buildings, yet exceptional for their location, size and purpose, dominates Subotica and makes it worthy of the name City of Secession. These buildings are, of course, the City Hall, the Synagogue, the Raichle Palace, banks…

Hungarian avant-garde artists, like their European counterparts, believed that industrial development leads to annihilation of beauty and that art should be introduced into everyday life, in accordance with vernacular architecture and tradition and usage of local materials. In search of national characteristics, studying folklore art and vernacular architecture, Hungarian version of Art Nouveau introduced a specific and unique architectural language.

Despite all the skills, abilities, knowledge and travels of local architects, it was only through engagement of architects from Budapest and other cities that the metropolitan spirit of new trends altered Subotica’s architecture. Prominent examples should be noted here, such as the duo Marcell Komor and Dezső Jakab, Ferenc Raichle, brothers Vágó, Pál Vadász as well as the local architects who embraced the change, such as Titus Mačković or Mátyás Salgo.

A strong support of citizens and a great inspiration of architects, artists and craftsmen who built numerous Art Nouveau structures, in Subotica and the nearby Palic, have all together created buildings which, even after one century, still remain as equally beautiful, attractive and intriguing.

Restoration of Szeged, after the great flood in 1879, defined the character of today’s Szeged. The majority of old buildings were then demolished and new buildings and palaces took their place. Regarding that event, in one of the stained glass windows in the Szeged City Hall a promise of Emperor Francis Joseph is preserved: “Szeged will be much more beautiful than it was before.” And so it was. At the beginning of the twentieth century, new Art Nouveau buildings nestled themselves within the already established urban core.

In both Szeged, and Subotica, we can recognize two directions in Art Nouveau architecture. One direction, represented by avant-garde Hungarian artists, following their European counterparts, believed that industrial development leads to the destruction of beauty and that art should be introduced into everyday life, relying on vernacular architecture and tradition by using local materials. In search of national characteristics, studying folklore, folk art and vernacular architecture – a form of Art Nouveau with national characteristics was created – the Hungarian Secession. It does not only bring a new aesthetic, it penetrates into the very essence of construction. Natural elements, heart elements, leaves and tulip flowers intertwine, flow through the façade canvas, pressed into plaster, formed mostly in Zsolnay ceramics and terracotta, or entangled in wrought iron. These elements and patterns continue to gush and glide into the interior, skillfully transformed into lively and sophisticated lines and colors on the walls, complemented by ceramic plant-like details, stained glass windows with flamboyant colors and decorations. They do not stop here though, as we continue to recognize them in wrought iron, brass and copper, in interior elements, wooden furniture, and ceramics.

Architects from the other Art Nouveau direction have created a specific architecture inspired by European influences. The famous Hungarian architect Ede Magyar, whose creative oeuvre dominates the center of Szeged, is often compared, not without merit, to the world-renowned Catalan architect Antonio Gaudi. Architect Ferenc Raichle, whose work adorns the neighboring Subotica, is also a part of this direction of Art Nouveau. In addition to these two architects, who built and created their most significant work in Szeged, many other architects, mostly from Budapest, left their mark on the city. Some of those architects are Lipót Baumhorn, architect of the New Synagogue, Ödön Lechner, Lajos Ybl, Alfréd Hajós and Ernő Foerk.

Whether intentional, because it lies by two rivers, or by chance – yet water as a motif is reflected in the architecture of Szeged throughout many forms and wavy lines, water lily patterns and mystical atmosphere of river shores.

END_OF_DOCUMENT_TOKEN_TO_BE_REPLACED

Introduction of the project

Szeged (HU) and Subotica (SRB), as preferred destinations of visitors, are very close to each other: not only from geographical point of view, but based on their tourism attractions as well. Art Nouveau buildings and heritage of the two settlements form such a complementary local and regional attractiveness, that can be the solid basis of a joint cross-border tourist destination. One of the most important objectives of the project is to introduce the common values and treasures of the region to the visitors, and to increase number of overnight stays as well as number of days spent by visitors in the target area.

Tourism institutions of Szeged and Subotica have already taken important steps toward a close touristic cooperation, however in the present project it will rise to a higher level. During project implementation, promotion of Szeged-Subotica Joint Touristic Destination outside the project target area will have a special emphasize, mainly in the countries from where most of the visitors arriving to the two countries, based on touristic statistics. Common design and branding at tourism events, and in publications, coherent and similar developments in the tourism initiatives will contribute in avoiding that the two towns remain target of ’one-day’ visits.

Main activities, among others, are as follows: elaboration of tourism Action Plan; common design and common publications on the common tourism destination; joint appearance towards the visitors, and other stakeholders to be attracted from outside the target area; development of mobile app, i-beacon and Braille signs for tourism attractions; organizing events related to the Art Nouveau heritage.

Development of a joint action plan based on the tourism development strategy of Szeged – which includes the developed tourism packages and their marketing strategy for 2018-2022.

Information board on Art Nouveau buildings

We are planning to place information signs for 15 Art Nouveau buildings in Szeged and 15 in Subotica. They would be approximately 30 × 60 cm Plexiglas boards that introduces the building in 3-4 lines (designer, date of construction, short description) in 3 languages (Hungarian-Serbian-English). The tables would be provided with QR codes that include a 3D virtual tour inside the building and further descriptions of the building.

Photographing and presenting the interior of the 30 Art Nouveau buildings in a web tour.

Developing a worksheet for children

The worksheet would be a free publication for 9-12-year-olds for educational purposes, presenting art nouveau in a playful way. They would be distributed to educational institutions and distributed in information offices. The approximately 24-page publication would also include a series of exercises that would help the children get to know the Art Nouveau buildings of the two cities.

June 10th is the World Day of Art Nouveau, where a one-day program series will be held in Szeged, in the Reök Palace and Subotica alike. The event includes musical building painting, workshops for children and adults, Art Nouveau fashion shows, free Art Nouveau walks. Presentation of the winning works of the Art Nouveau drawing competition previously announced to children on outdoor stands on the square.

The results achieved in the framework of this project would be presented on the website. We present the most important Art Nouveau buildings with descriptions in Szeged and Subotica, the joint tourist package.

We would like to make the Art Nouveau values of the two cities known to tourists through a mobile application to reach the widest possible audience.

Within the framework of the project, tourist information booklets are made in several languages introducing the two cities. Catalogue for tour operators to find out what tourist services tourists can use in Szeged and Subotica. 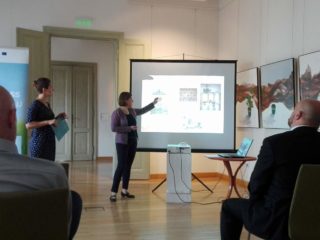 The project opening event was held on 26th June 2018 in Szeged, in Reök Palace, where the aim, the project activities and the expected outputs of the project were presented. The opening conference was opened by Nagy Sándor, the Deputy Mayor of City of Szeged.

Get in touch with us!

This website has been produced with the financial assistance of the European Union. The content of the website is the sole responsibility of Tourist Organisation of Subotica and can under no circumstances be regarded as reflecting the position of the European Union and/or the Managing Authority.